Bunker Hill is a lost Los Angeles neighborhood, and On Bunker Hill is a memorial website that was born over the course of a year’s collaboration. The contributors followed their own particular obsessions down the historical rabbit hole, coming up with aspects of the community’s lore that were placed on a virtual map, so interested visitors could explore at their leisure.

Although On Bunker Hill is no longer being updated, people continue to discover the site and contribute their own insights and memories through the comment section. But occasionally, someone comes along who has something more to offer than a comment or a link, and so we bring the On Bunker Hill blog back to life for a brief moment, so this someone can take their rightful place among the ghosts. 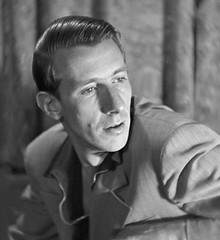 Born in Santa Monica in 1905, by his early 20s he was a vaudeville star as the hilariously taller half of the comedy dance team Barto & Mann. Dewey Barto [real name Dewey Smoyer and the pop of comedienne Nancy Walker] and George debuted their act on the west coast circuit in 1926 and by March 1927 were featured on the other Broadway, at New York’s celebrated Palace Theatre.

Of their east coast debut, Zit’s Theatrical Newspaper raved "Ten minutes before they went on at the Palace last Monday afternoon nobody thought very much about Barto & Mann; ten minutes after they came off stage, the whole Broadway world was talking about them… Acts like these only come along once in a while." 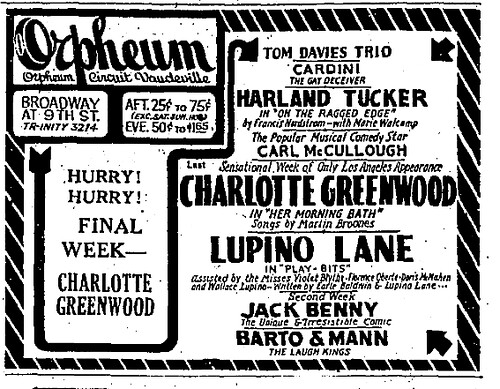 Appearing at L.A.’s Orpheum in March 1928, they were praised in the L.A. Times as "a knockout team," though their set at the Hillstreet the following month discomfited one reviewer: "The act presented by Barto & Mann was one of those hectic affairs in which the participants did everything from a climb up the proscenium arch to a near-back-flip into the orchestra pit. The excellence of the dancing and clowning in the early portions of the act led one to expect a much more worthwhile finale than the one offered, which, unfortunately, bordered plainly on vulgarity."

One man’s vulgarity is another’s hilarity: scope out this rare filmed appearance, from the 1933 Texas Guinan vehicle "Broadway Through A Keyhole," and decide for yourself!

As Vaudeville faded, Barto & Mann joined the Broadway cast of Olson and Johnson’s Hellzapoppin’ (though they’re not in the 1941 film), with featured billing from 1938 through 1942. The team split up in December 1943.

Around this time, George Mann married Powers Agency model Barbara Bradford and shot a series of film noir-inspired images of his young bride. 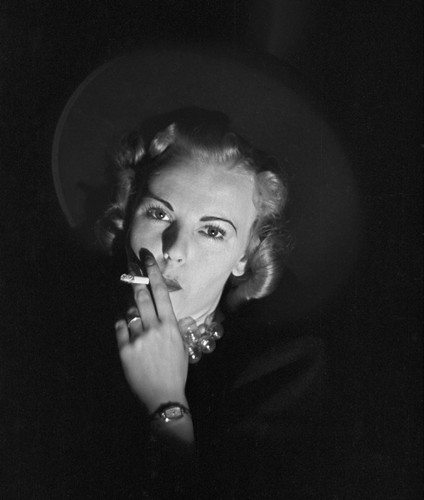 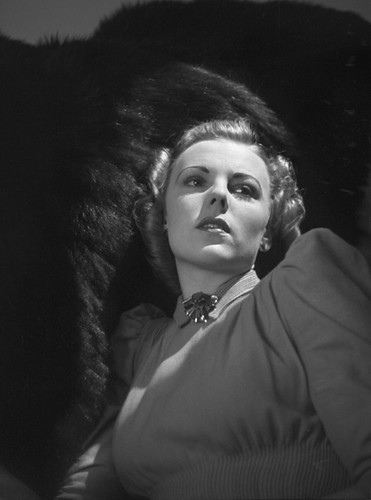 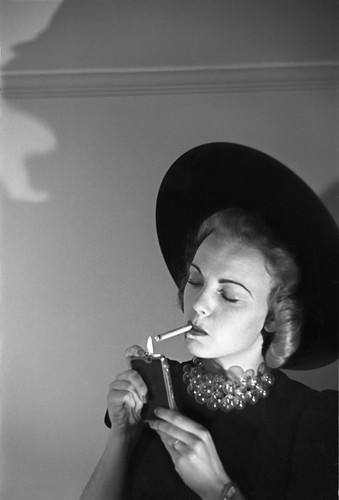 In his post-performance life, George Mann turned his imagination to entrepreneurial enterprise and professional photography, which brought him to Bunker Hill. In the late 1950s, when the neighborhood’s days were known to be numbered, he arrived atop the peak with his camera to document some representative scenes, returning in November 1962 for additional shots. 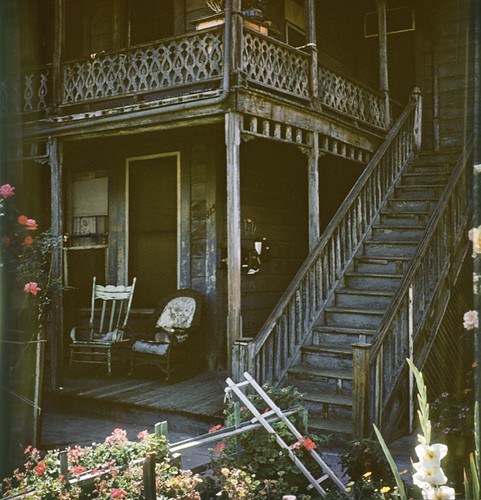 These never-before-published color images of old Bunker Hill were originally displayed in 3-D viewers of Mann’s own design, which were leased to various Los Angeles businesses, including Hody’s Drive-Ins, and other restaurants, bars and doctor’s offices. Mann would swap out the photo selection regularly, so if these evocative scenes of Bunker Hill weren’t available, one might peep at Calico Ghost Town, Catalina Island, Descanso Gardens, Disneyland, Knott’s Berry Farm, Pacific Ocean Park, Watts Towers or Palm Springs.

In his 3-Dimensional Bunker Hill set, created to distract anxious patients and hungry tourists, George Mann captured a seldom seen side of this lost Los Angeles neighborhood: the gracious avenues and genteel decay, the old people, their cats and their gardens, abandoned newspapers, vacant lots, the shadows and the sunlight. We are in his debt.

George Mann died in 1977, and his extraordinary photographic archives are currently being organized, scanned and made available for licensing. We trust you will enjoy these rediscovered images from old Bunker Hill from the George Mann Archives.

Note: a few more George Mann Bunker Hill photos have been discovered since this entry was first written! See this blog post by Jim Dawson and this one and this other one by Nathan Marsak for more. 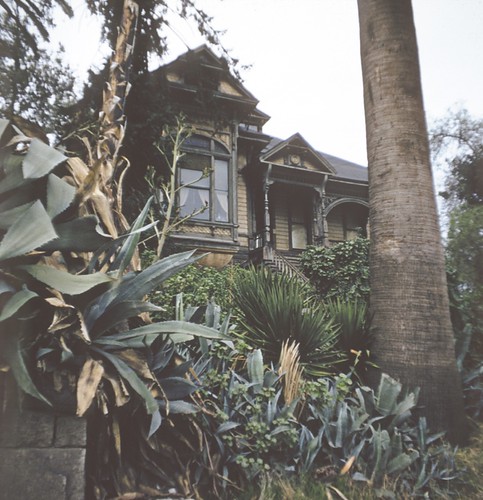 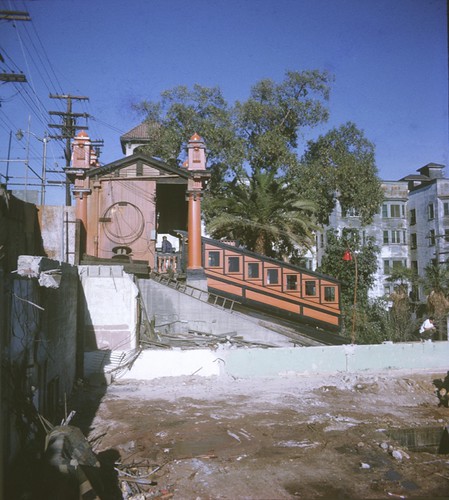 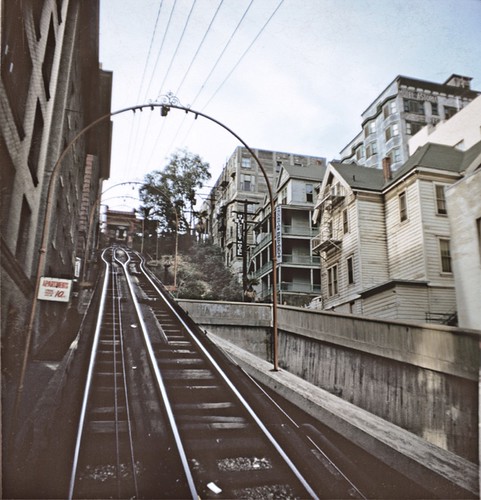 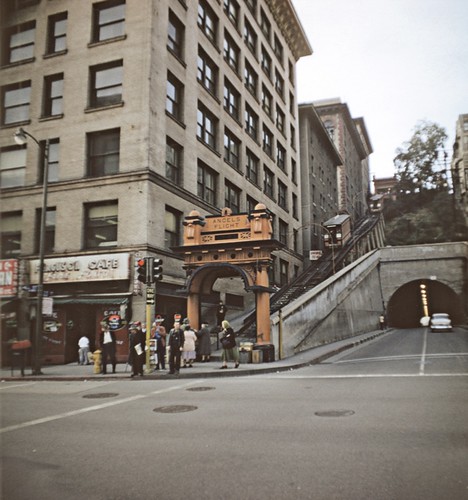 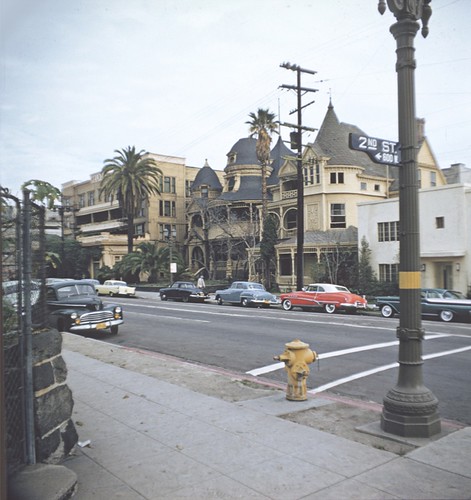 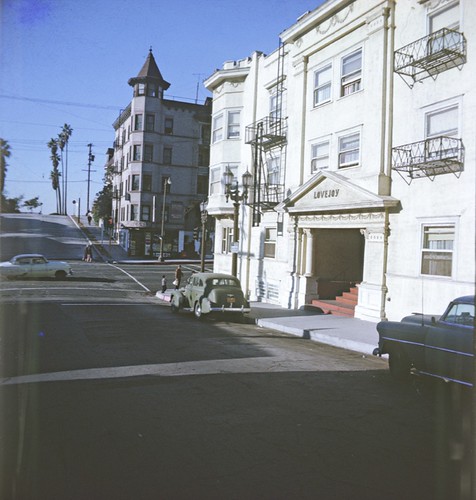 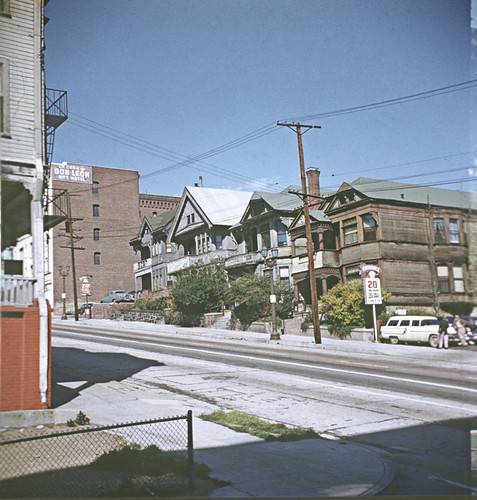 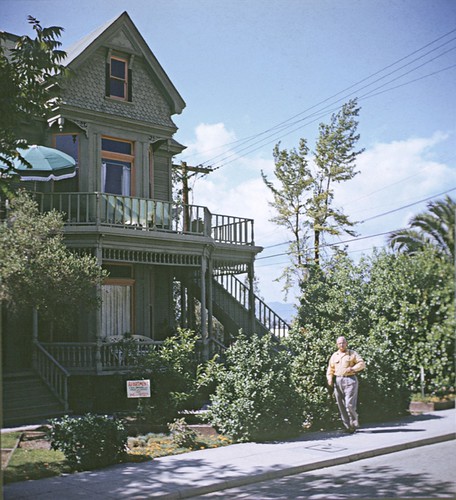 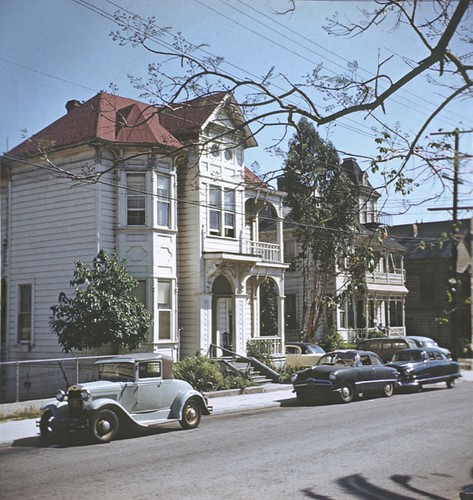 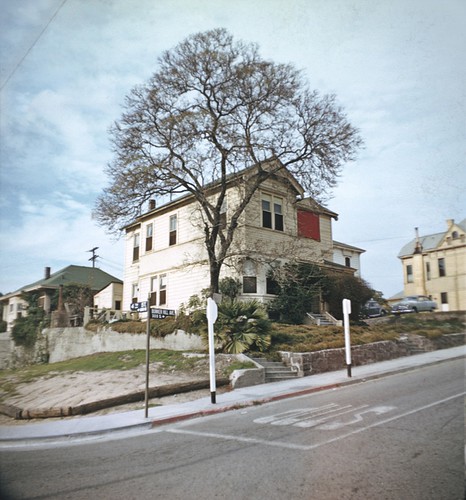 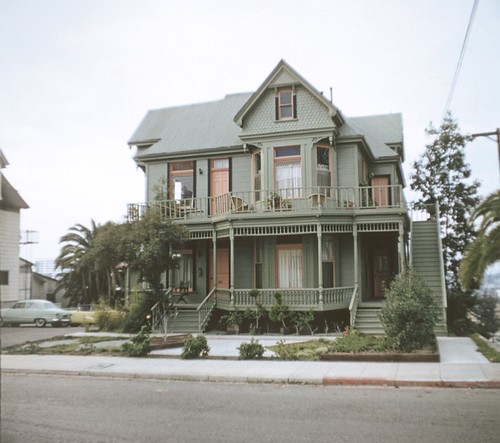 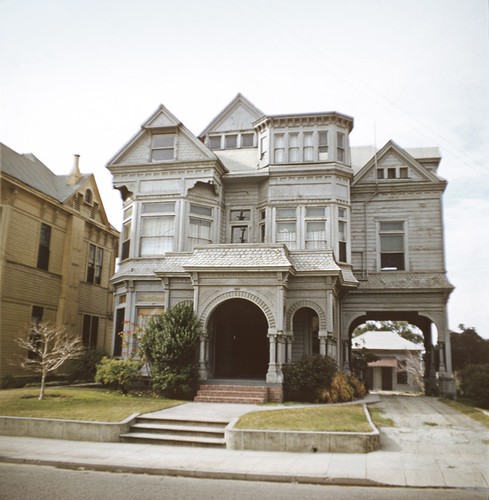 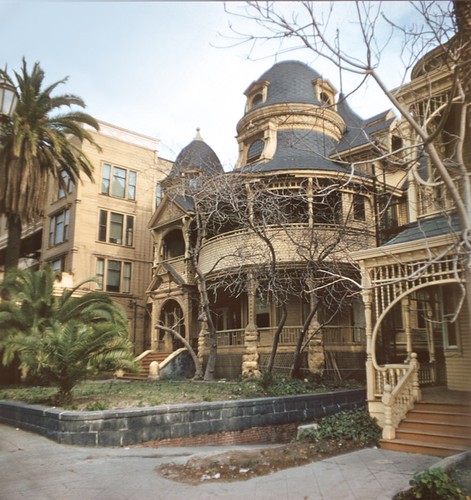 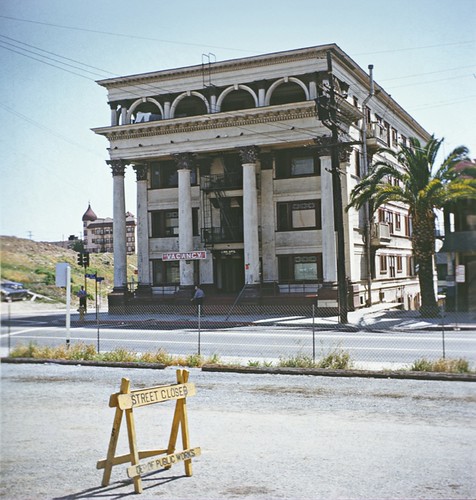 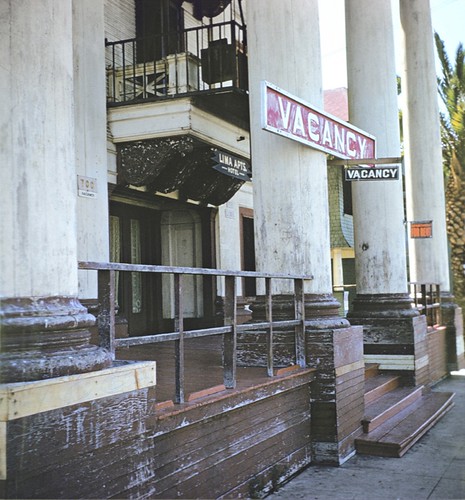 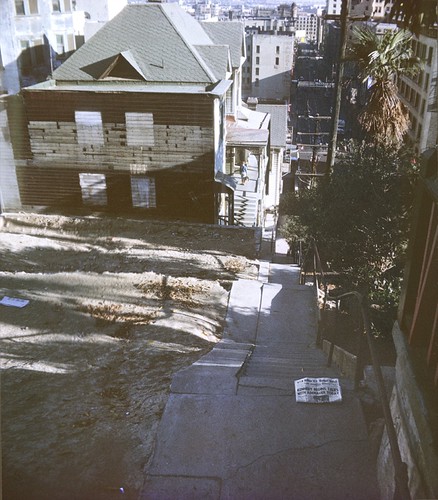 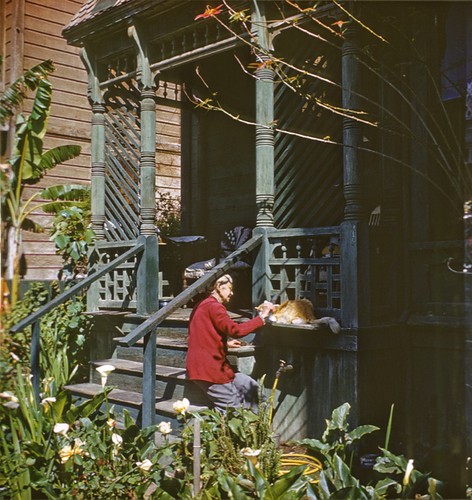 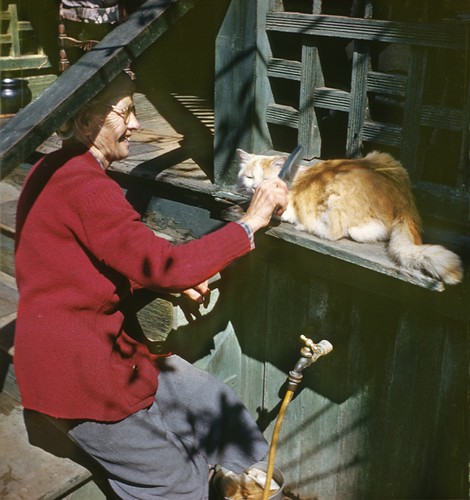 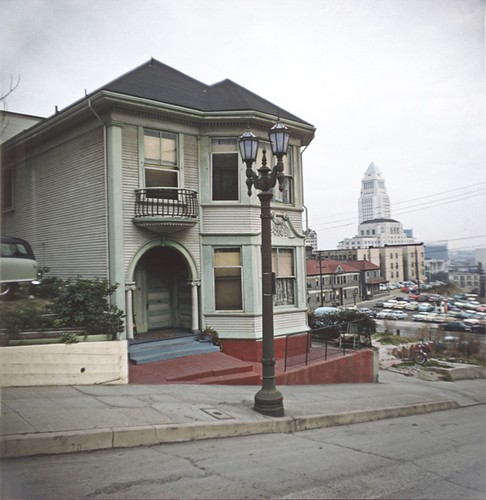 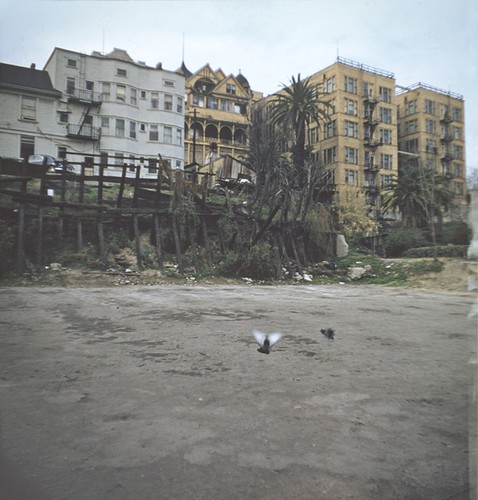 Thanks to George Mann’s son Brad Smith, and daughter-in-law Dianne Woods, for allowing us to reprint these copyrighted photographs and tell George’s story. To see George’s photos of theater marquees, visit http://www.flickr.com/photos/brad_smith

For a representative selection of photographs from his archive, or to license images for reproduction or other use, see http://www.akg-images.co.uk/_customer/london/mailout/1004/georgemann/

Kim Cooper is the creator of 1947project, the crime-a-day time travel blog that spawned Esotouric’s popular crime bus tours, including The Real Black Dahlia. She is the author of The Kept Girl, the acclaimed historical mystery starring the young Raymond Chandler and the real-life Philip Marlowe, and of The Raymond Chandler Map of Los Angeles. With husband Richard Schave, Kim curates the Salons and forensic science seminars of LAVA- The Los Angeles Visionaries Association. When the third generation Angeleno isn’t combing old newspapers for forgotten scandals, she is a passionate advocate for historic preservation of signage, vernacular architecture and writer’s homes. Kim was for many years the editrix of Scram, a journal of unpopular culture. Her books include Fall in Love For Life, Bubblegum Music is the Naked Truth, Lost in the Grooves and an oral history of Neutral Milk Hotel.

< The Way We Blog Now > Sunshine and Noir